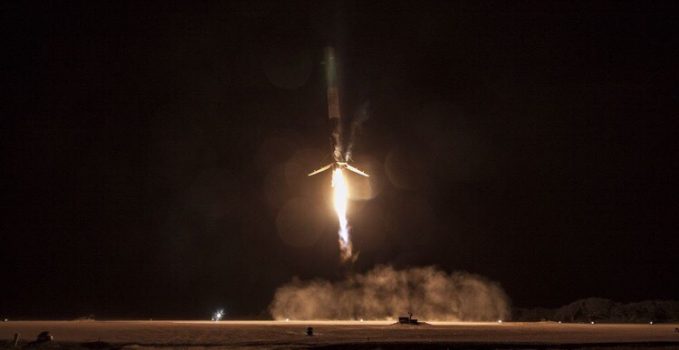 Yesterday, SpaceX wrote history by sending six satellites into space, and then landing the same rocket upright so it can be used again. Quite an amazing feat, but let’s look at why exactly SpaceX’ rocket landing is so revolutionary. And what will this mean for the future of spaceflight?

The company launched the heaviest version of its self-produced and designed rocket, the Falcon 9 v1.1, on a mission that carried 11 ORBCOMM communication satellites to Low Earth Orbit. That was always the primary target of the mission, and it went succesfully. But it’s what happened after that that’s unique.

Rather than having the rocket’s first stage fall back into the ocean (as is usually the case), SpaceX had the Falcon’s first part make a controlled landing on a special launch pad somewhere South of Cape Canaveral. The rocket touched down at exactly the right mark, shut off its engines, remained upright, and wrote history.

Here you can see the landing:

It’s not the first time SpaceX, or any other company for that matter, has actually managed to land a rocket after a launch. You might remember how Blue Origin boasted about ‘beating SpaceX’ a few weeks back – which was simply not true. And you might remember that even SpaceX itself had tried rocket landings before.

What SpaceX has done now is far more complicated than last month’s launch by Blue Origin, even though Jeff Bezos has claimed otherwise. Here’s a decent image of the difference between the ‘New Shepard’ launch, and SpaceX’ rocket landing. 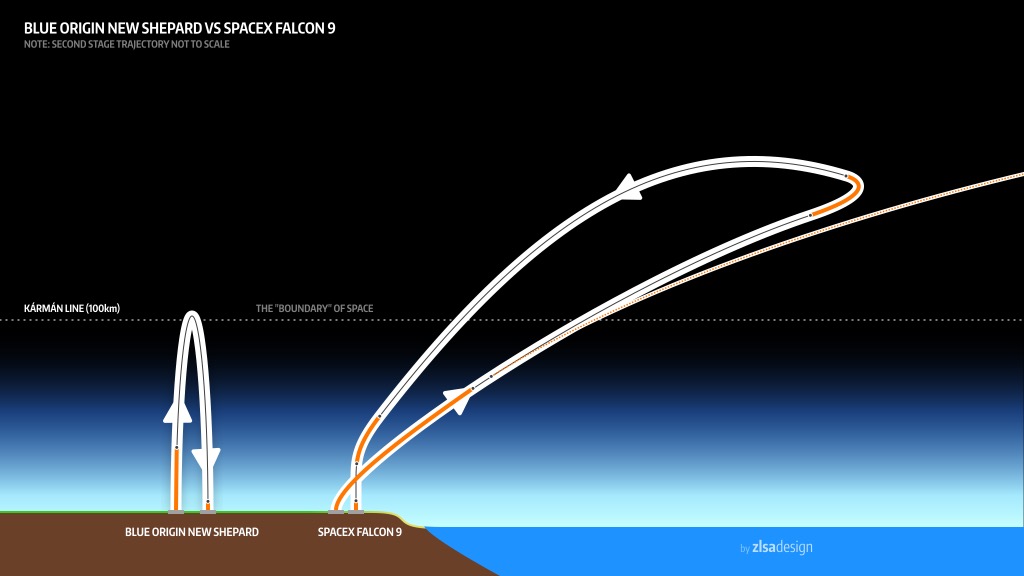 Experimenting with the technology

SpaceX has been experimenting with this technology for a few years now, starting with the Grasshopper, a prototype rocket that would launch vertically and then land on the same spot. The highest that the Grasshopper ever flew was only a mere 700 meters before SpaceX decided to apply the technology into its regular rockets.
The company has already tried twice to land the rocket after a succesful launch, both times on a special ‘barge’ at sea. Both times, the rocket exploded on impact due to the instability of a sea-floating platform. The third time SpaceX attempted a rocket landing, the Falcon 9 exploded after 2 minutes in the air.

Other companies are working on their own reusable rocket. United Launch Alliance, which currently builds the ‘workhorse of the American space industry’ (the Atlas V) has started working on the Vulcan, a new rocket which can return to Earth similarly to the Falcon.

Saving a LOT of money

Landing rockets can save 80% of launch costs

Right now, SpaceX charges about $60 million dollars for one launch. After the launch, the largest part of the rocket (the first stage) is discarded. So it’d make sense to find a way to reuse that part of the rocket, because that’d make the next launch significantly cheaper. You just have to add a new second and third stage, and then refuel the rocket. That last part only costs $ 200,000, says SpaceX founder Elon Musk. If SpaceX can get every (or at least most) rockets back to Earth after launching, it can start offering launches for significantly less money.

That’s a very attractive proposition to companies like ORBCOMM that want the cheapest way launch their satellites, but also for NASA. The space agency doesn’t have its own rockets anywhere, but instead has to buy them from companies like SpaceX, or Orbital Sciences or United Launch Alliance.

So what will this mean for the future?

NASA has been ‘stuck’ in Low Earth Orbit, meaning that since 1972 no humans have flown beyond 400 kilometers above Earth. All NASA’s resources for manned missions have gone to the expensive ISS (PDF), with no more funding to go to the moon or even Mars. But it’s important to note the increasingly large role that private companies such as SpaceX have been playing for the past few years.

Using the private sector is very attractive to NASA

Companies like SpaceX (and others like Orbital Sciences and United Launch Alliance) have been building their own rockets which they would then ‘sell’ to NASA, as well as to private companies. This construction (called the Commercial Resupply Service program) is a lot cheaper for NASA than it would be to design a new rocket from scratch.

Those lower costs result in NASA having some breathing room for further missions. Because the space agency has to spend less money on the ISS, it can focus on what it’s always been good at: Space exploration. 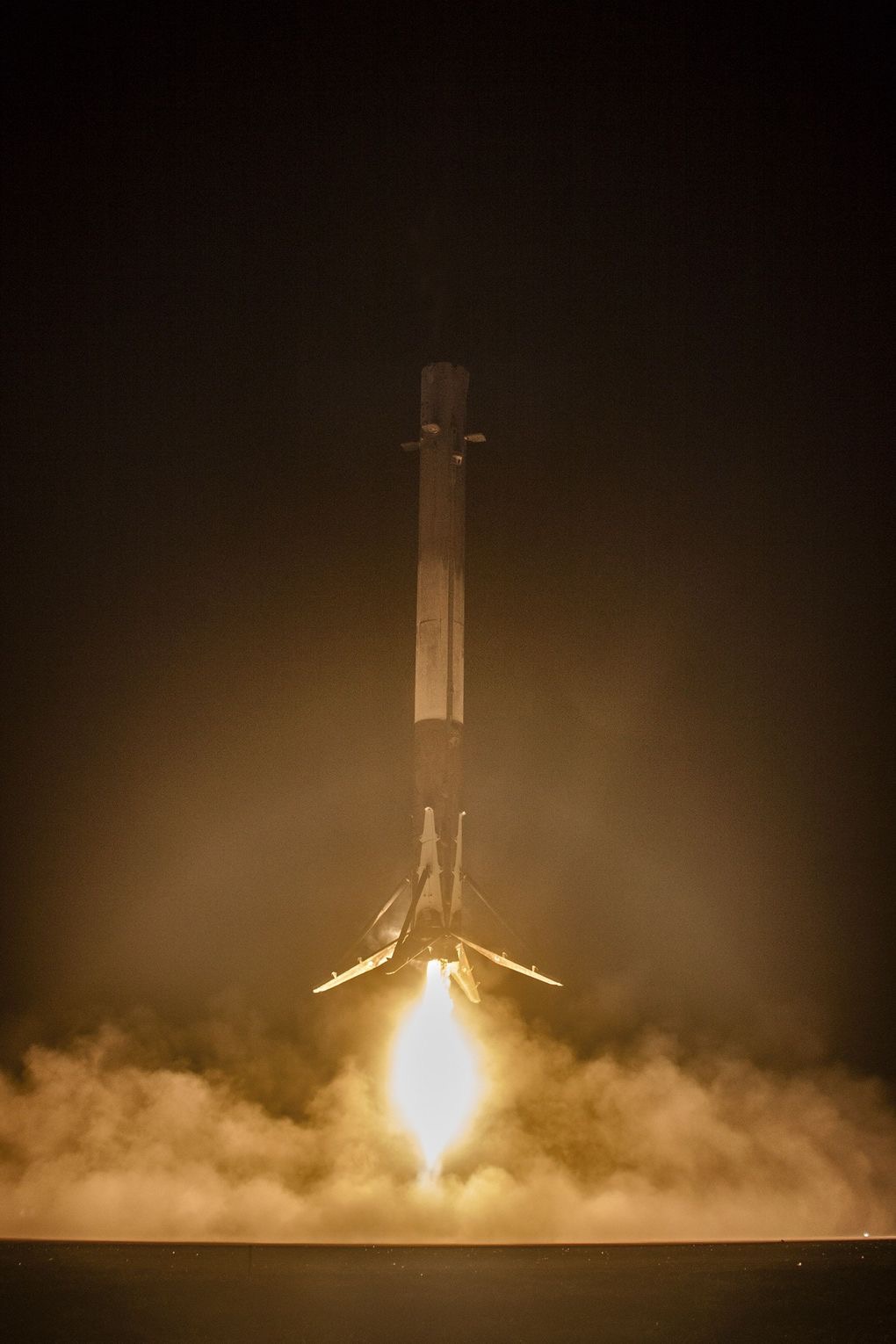 The fact that SpaceX is now working so actively on lowering costs for launches, competitors have no choice but to follow suit. Already the launch market is pretty skewed: United Launch Alliance offers satellite launches for $ 200 million. This is the result of bureaucratic governmental contracts that force the US Air Force to only use United Launch Alliance rockets, but those contracts are already disputed by SpaceX. The company wants to put out a bid on governmental launches, and once there’s a competitive market for that, which company is the government going with? The $60 million SpaceX contract, or the $200 million ULA contract?

That same competitive market is equally important for the private sector. SpaceX can make it more attractive for private companies to launch their own satellites, an endeavour that’s often too expensive for research teams or companies. Already we can see the impact cube-sats have on the world, as they make it cheaper for university teams or telecom operators to launch single use, low cost mini satellites.

The idea is that eventually SpaceX can reuse its rockets. That’s not going to happen to this particular model though. This Falcon 9 will be taken to SpaceX’ headquarters, where it will be studied carefully. The company will determine what the rocket’s condition is, to see what repairs or maintenance are needed for the rocket to fly again. This one won’t be launched again, but the next rocket that lands after a launch probably will. That’ll first be in a test flight to see if there are any complications.

SpaceX is running a marathon, not a sprint

SpaceX is running a marathon – it takes careful steps and doesn’t take sprints. The company is not financially reliable on developing a reusable model, but wants to perfect the process.

SpaceX already runs supply missions to the International Space Station under contract with NASA. In 2017, the company will provide manned space flights as well – but for that, the rocket will have to pass rigorous safety procedures and checks. It might very well be that the Falcon 9 has sustained just enough damage that prepping the rocket for another flight is expensive or even impossible under the current safety checks. It’ll be a while before NASA will run those checks on the Falcon 9.