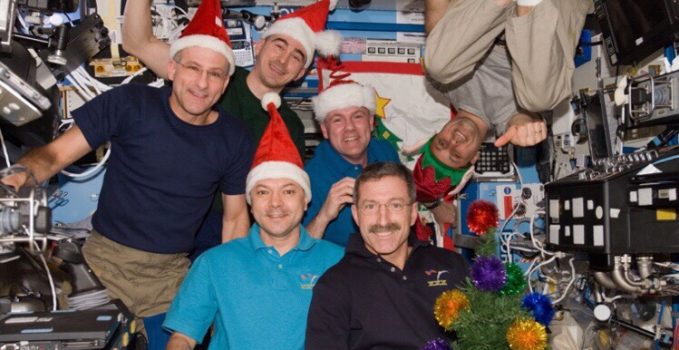 How do astronauts celebrate Christmas in space?

You’re 400 kilometers above the Earth, locked in a small space with your colleagues, far away from your family… It doesn’t sound very pleasant to be in space during the holidays, but even in the International Space Station astronauts celebrate Christmas. But how?

The 6 astronauts currently aboard the Station aren’t the first to spend Christmas there – and they won’t be the last. The Station has been permanently manned since 2001, which means there have been quite a few Christmas parties.

Decking the halls with jolly

The ISS is being decorated especially for the holidays. The astronauts put up Christmas lights, and just like on Earth there’s a box with Christmas decorations hidden somewhere in the Station’s attic. Amongst those are a little Christmas tree half a meter high, and the astronauts put on Christmas hats and hang up some socks on a ‘mantle’.

Right before Christmas, a supply ship arrives carrying not just the necessary food and clothing, but also some holiday gifts for the astronauts.

Time (sort of) off

Besides the regular maintenance, astronauts take the day off

On Christmas Day, the astronauts are given the time off to celebrate – though they have to do so some routine maintenance work to keep the Station operational. A few important tasks are carried out that day, and the astronauts have to do their regular 2 hours of daily physical excercise to prevent bone- and muscle loss. But besides that, they’re free to enjoy a nice feast.

Putting the ‘International’ in ISS

Christmas isn’t celebrated in December for everyone

Due to the different nationalities of the astronauts on board, December 25th is not the only holiday that’s celebrated on the Station. The Russian cosmonauts for instance celebrate the Russian-Orthodox ‘Christmas’, on January 7. Usually, we don’t hear a lot about that since Roscosmos isn’t as heavy on the PR as NASA is…

Christmas on the way to the moon

The International Space Station isn’t the first place where ‘space-Xmas’ is celebrated. The first time that happened was during the Apollo 8 mission, which launched December 21 1968 and only returned on December 27. Crew member Jim Lovell, Frank Borman and Bill Anders were prepared for Christmas on their way to the moon. They held a short Christmas speech for the people back on Earth:

In the following years, Christmas in space became a much bigger event. In the American space station Skylab the astronauts Gerald Carr, William Pogue and Edward Gibons celebrated Christmas. For the occassion, they made a Christmas tree out of aluminium cans. 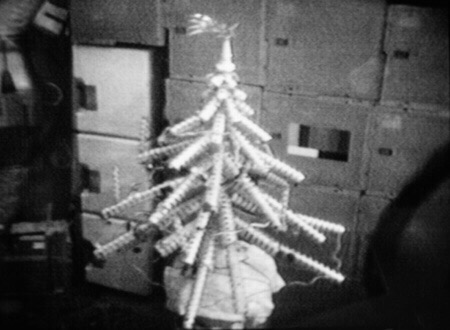 After Skylab, it took a while before an American would celebrate Christmas in space again. That honour went to John Blaha, who spent the holidays in the Russian Mir-station with Russian cosmonauts Valery Korzun and Alexander Kaleri in 1996.

During the Space Shuttle days, astronauts only celebrated Christmas once while in space. During that year, they gave an awesome Christmas present to the world: On STS-103, the Hubble Telescope was repaired on Christmas Day.

Christmas in space of often a necessary inconvenience, and astronauts try to make the best of it. Their tough job makes it impossible to spend Christmas with their families, so today let’s also think about the 6 astronauts that are currently 400 kilometers away from Earth.