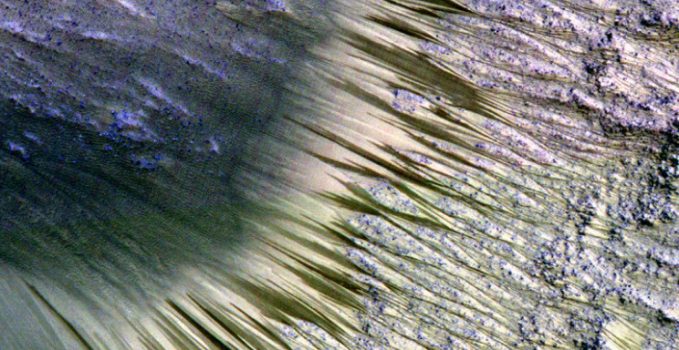 Posted On September 30, 2015 By In Achtergrond, Astronomie, Ruimtevaart And 2419 Views

What does the discovery of water on Mars actually mean?

Liquid water has been found on Mars, but what does that actually mean in practice? Let’s take a look at what has really been discovered, what that means for our understanding about Mars and water in the universe.

What exactly has been discovered now?

Astronomers used the Mars Reconnaissance Orbiter to show that certain areas on Mars are briny (meaning salty) – and that is pretty odd. The brine can only appear when salt water evaporates. The salt minerals show that there has been salt water on Mars for at least a while, which has dried up.

In itself, there has been no direct sign of liquid water – an important distinction to make. Overall though, the evidence is pretty convinving: It’s practically the way for the salt to appear on Mars.

How did we find this out?

Since the first fly-by missions of the Mariner-probes, we’ve come to know a lot about Mars, but there was always one aspect which was doing astronomers’ head in: The dark lines that would sometimes appear on hills.

These dark lines are called ‘Recurring Slope Lineae’, or RSL’s for short. And no one knew exactly what they were.

The RSL’s only appear in warmer seasons, only to start shrinking again when the temperatures would drop. That had scientists speculate the lineae had something to do with evaporating water, but that was never certain.

Does it mean there are flowing rivers on Mars?

We haven’t actually found cascading rivers on Mars, but only a few drops

The water hasn’t been directly observed, so it’s hard to say what quantities we’re really talking about. But don’t image there to be massive flowing rivers on the planet.

The RSL aren’t that big. They’re about 4 to 5 meters wide, and vary in length to a maximum of around 200 meters. Also, the water’s dried up for half of the Martian year. If water will eventually be detected, it will most likely be a very tiny stream that only appears just above the surface.

So why are we calling it ‘flowing’ water?

The fact that people call this ‘flowing water’ has mostly to do with earlier discoveries. It was already known Mars had (water) ice, primarily in its polar regions, and rovers have proven that the Martian soil contains small mounts of water.

This was never drinkable water though, which you would be able to pour in a glass to drink. This is the very first time actual, liquid, flowing water appears to be flowing over the surface.

By the way, this water isn’t really drinkable either – unfortunately, it’s way too salty for that.

Could there be life?

The chance of finding life has increased, but far from from proven

So far, no life has been found on Mars, but the recent discovery has given scientists more hope of finding it. Water has always been synonymous with ‘life’, but usually that’s only possible in liquid form. The chance of bacteria living in ice are almost nil, but in liquid water the possibilities of microbes swimming around in water are a lot higher.

At this moment, it’s not possible to detect life in the water on Mars. Worse still, we can’t even detect the water itself, let alone life in it. To do that, more research is neccessary, though at the moment it’s unclear in what form that will be.

The most logical course of action would be to send out a rover to take samples of the water. Curiosity and Opportunity are both too far away (and can’t drive up the slopes anyway), but in 5 years NASA sends the ‘Mars 2020’-rover to the Red Planet that might come close.

A more practical solution would be to use satellites like MRO to perform readings of the emissions over the water lines. Researchers can use that to see bacteria that might excrete other fumes as the ones that can be seen in the atmosphere.

For that, more advanced research is required. So advanced, in fact, that it can’t be performed using current technology that Mars-rovers and satellites have now. But not to worry, there are still plenty of Mars-missions planned.

Haven’t we found ‘water on Mars’ a few times before?

The new findings are definitely not the first signs of water on Mars. Ever since the 70’s, we’ve known Mars once had flowing water. That became apparent from photos showing residue from riverbeds and waterfalls. Since then, the search for water on the planet has been one of the prime reasons of sending many probes, satellites and rovers to Mars.

It may seem that every few years, the disovery of ‘water on Mars’ is announced. Usually, messages like these are a bit hyped, and speculation arises that now, water or even life has ‘really really been discovered now!’ And usually, these announcements are a little dissappointing. It means we’ve come a bit further in our research, but learning just a little more about Mars.

Slowly but surely we’re collecting all the pieces of a very puzzle. And right now, we found one of the corners.