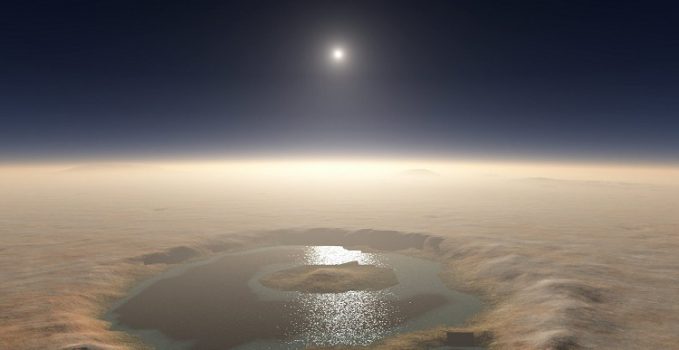 A short history of discoveries of water on Mars

NASA has (again) found water on Mars. And (again) it is a unique discovery that (again) transforms what we know about the Red Planet. So what’s different now? Hasn’t water been found on Mars many times in the past? Let’s look at the history of water on Mars.

The first time people started speaking of water on Mars was way, way before NASA ever landed a probe on the planet. In fact, it happened decades before humanity even came close to getting into space or even off the ground. As far back as 1784, the astronomer William Herschel published a paper that suggested that the large dark patches that Mars had were actually vast oceans of water.

The concept of Mars having liquid water trickled down into science fiction, with stories like The War of the Worlds by H.G. Wells which were based on the now infamous ‘Mars Canals’. Wells, among others, was a big believer that there were intelligent Martian beings that dug their own canals to support water.

These ‘observations’ might seem farfetched, but in those days there were only telescopes to look at Mars, which gave scientists of the time of warped view of the planet. For serious observations, we would have to leave the planet.

The Mariner missions were the first probes to ever actually reach Mars, but from the first flyby of Mariner 4 it was apparant Mars was kinda…. Dull, really. The planet was a barren wasteland, dry as a bone and certainly not with any intelligent green men waving their hellos. The oceans that Herschel visioned almost 2 centuries before were not there, but on the other hand Mars wasn’t the dry ball of rock that astronomers had feared it to be.

Most notably, the geological structure of the planet gave a very clear message: There was water here, once upon a time, and a lot of it too. It was the Mariner 9-mission, the first to orbit Mars rather than fly by it, that suggested the presence of water ice on the polar caps as well.

Mariner 9 sent back a treasure trove of information about Mars, more than enough to plan a new visit which would specifically look for water on the planet.

It was the Viking missions that really transformed our ideas about water on Mars though. The landers set down in 1976, and confirmed what scientists had hoped already: Mars once had liquid water.

Viking showed overwhelming evidence of water in the past

The evidence was overwhelming. Dried rivers beds, bedrock displaying erosion, deep chasms that could only come from flowing rivers of water. It was time to start looking for the evidence of water, which happened with several satellites such as the Mars Global Surveyor.

Ice on the polar caps

In 2006 NASA released several photos of two Martian crates (Terra Sirenum and Centauri Montes) made by the Mars Global Surveyor satellite. The images showed the craters to have small gullies, which, according to NASA, would have been created fairly recently. The gullies were dark streams which only appeared at certain intervals, and were created in about a year. Sound familiar?

It just so happened that this was the moment NASA had actually <strongfirst discovered the dark streaks that have now been associated with flowing water. However, at the time it was not certain at all that water created these streaks. Researchers opted instead that the streaks were originally just dark ground which was covered by thin layers of lighter coloured dust.

It would be a while before the mystery of the dark streaks was solved, but in 2003 another satellite found ‘water on Mars’: The Mars Odyssey. Its Gamma Ray Spectrometer had looked at the soil and found ‘enough water to over Lake Michigan’.

This water came in the form of water ice, which was located just below the surface. However, it wasn’t water ice like you would imagine an icecube. The concoction had a lot of other soily stuff in it, like mud. However, Odyssey’s findings showed ‘slightly more than 50% water density’, meaning if you would fill a bottle with the stuff and heat it up, more than half of the bottle would still be water.

This was confirmed by the Phoenix lander, in 2008. The lander found ice underneath the surface, at a depth of only a few inches. The ice layer was at least 8 inches deep – but deeper than that, Phoenix wasn’t able to search.

Again, this was presented as ‘water on Mars’, but in reality it was both unobtainable and undrinkable, and far from liquid.

The same year, water wasn’t just found under the surface but also in the massive polar ice caps. Discovered by the same Odyssey satellite and the Mars Global Surveyor, researchers presented results that the North and South Pole on Mars consisted of large amounts of dry ice.

To have more accurate readings of the actual surface, NASA sent out rovers to Mars. Sojourner, and later Spirit and Opportunity roamed the Martian surface with great success.

Spirit really hit the jackpot at its landing site

Opportunity at multiple occasions found clay, which is usually only found around water.

Spirit hit the jackpot when it found basalt rock right in its landing site, which was a sign of volcanic activity that was accompanied with water.

In 2005, the rovers wheel broke and Spirit had to drag it along. The drag exposed some of the Martian surface, and after analysis NASA researchers found silica which could only have been formed by water.

In 2006, Spirit got its wheels stuck in a ditch and could no longer move – but that didn’t stop the rover from discovering water. In 2010, Spirit found that water had trickled through the Martian surface, possibly in the form of snow.

In 2012, a new rover landed on the planet. Curiosity was also built for the sole purpose of finding traces of water, which it did pretty soon after. Rocks in the Gale Crater where the rover landed showed ‘compelling evidence that liquid water had was been present on Mars’ as recently as april of this year.

Mind you, all these discoveries merely found evidence of water in the past. So, MRO’s discovery isn’t the first time water has been found on Mars. It probably won’t be the last either. But the discovery of actual liquid water? That’s new.