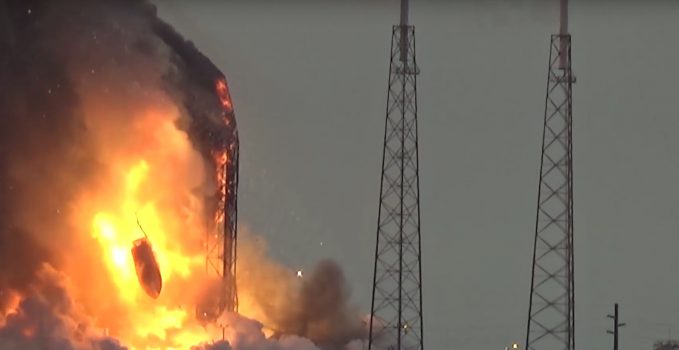 SpaceX returns to flight, but what caused its explosion?

SpaceX has rounded off its investigation of the rocket that exploded somewhere last year. The company is back on track to ‘Return To Flight’, but what exactly happened with the Falcon 9 that blew up during a static fire test?

On September 1st, 2016, a Falcon 9-rocket exploded during a routine test. The rocket was scheduled to lift off 2 days later, carrying the Israeli made Amos-6 communications satellite. But during the static-fire engine test (a routine procedure before SpaceX-launches), a huge explosion destroyed the top half of the rocket, including the $195 million satellite. Thankfully though, no one was wounded in the accident, though but SpaceX had to delay most launches that were on schedule for the rest of the year.

The delay was necessary for the company to research the cause of the explosion. That wasn’t just for its own safety – the company doesn’t keep it’s FAA-license to continue flights if there’s no conclusive report

It wasn’t aliens or sabotage

Following the days after the anomaly, many wild reports popped up trying to determine the cause of the failure. Analyzing the video of the explosion, it’s pretty clear the explosion started on the second stage of the rocket, yet SpaceX founder Elon Musk got the conspiracy theory ball rolling by ‘not ruling out’ something hit the rocket.

This prompted thousands of fans to scrutinize over details of the video, coming up with bizarre explanations like the rocket being sabotaged by competitors like United Launch Alliance and even UFO’s.

The reality is much simpler.

Conclusions of the report

As the original footage showed, the explosion did start in the second stage of the rocket. More specifically, an accumulation of oxygen occured between the so-called ‘composite overwrapped pressure vessels’ (or COPV’s) that store cold helium to maintain tank pressure.

The investigation concluded that pressure was built up between the COPV’s and the overlays with the external tank. Parts of the COPV’s were burst, which is a sign of ignition of the COPV’s. As a result, SpaceX plans to return their COPV-configuration to a warmer temperature helium which has been used in earlier launches.

The problem lay in the ‘composite overwrapped pressure vessels’

SpaceX has had problems with its helium-refuelling system in the past, which in June of 2015 caused another explosion of a Falcon 9 – the only explosion during flight the company ever experienced, and the only launch failure out of 29 successful ones of SpaceX’ workhorse. With the launch, SpaceX was to deliver a Dragon cargo ship to the International Space Station when the Falcon 9 exploded 9 seconds after liftoff. In the investigation following the accident, an over-pressurized helium tank turned out to be at fault.

Back on track for SpaceX?

In December, SpaceX asked for more time for the investigation and pushed back its initial launch date to early January. The FAA gave the company the all-clear for a January 8 launch date, but this has been pushed back to the 14th due to bad weather forecasts at Cape Canaveral.

Most planned SpaceX launches for 2017 are pushed back some 3 months, though the company has already slipped several launches even further. The first unmanned launch of the Dragon V2, which will eventually fly astronauts to the International Space Station, was delayed from May 2017 to August 2017, however the first actual piloted mission of the spacecraft slipped from August of this year to the second quarter of 2018.

This is mainly due to SpaceX’ proposal to change the fueling process of the rocket. The company had the unconventional plan to fuel the vehicle with the astronauts already on board, in order to “minimize the time and number of personnel exposed to the hazards of launching”. After the 1 September anomaly, the company instead opted for the more conventional method of fueling the rocket 30 minutes prior to launch.

The first launch though is that of 10 Iridium-satellites. The RTF (‘Return To Flight’) is now scheduled for January 14. The company will launch 10 satellites, as part of a 7-flight contract with Iridium which will replace their entire 70-part satellite communications system.