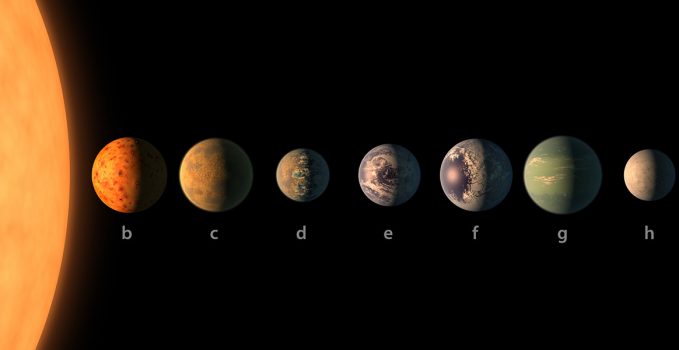 Trappist-1, a small star pretty close to Earth, has no less than 7 exoplanets orbiting it. The discovery is another new milestone in a series of many successful exoplanetary discoveries, but what exactly makes the Trappist-1 research so exciting? 4 questions about the big news.

A team of Belgian and American scientists made made a big announcement yesterday: a star was found 7 exoplanets orbiting it, the largest amount of exoplanets ever discovered around a single star.

This is exciting for a few reasons. Not in the least place, it’s because exoplanet discoveries are still a fairly novel thing. The first exoplanet (i.e. a planet outside our own solar system) was only discovered 25 years ago, though since that time there have been surprisingly many exciting discoveries. The exoplanet closest to Earth was a big deal, as was the first discovery of an exoplanet with an atmosphere, an exoplanet orbiting a sun-like star, or an exoplanet within the habitable zone of its star. More recently, scientists rejoiced at the discovery of the first exoplanet that actually resembled Earth. An equally, or perhaps even more exciting discovery was that of an exoplanet as our neighbour, as it was discovered that our closest star Proxima Centauri b hosts an exoplanet.

Yesterday’s announcement falls within that category of milestones within exoplanet research. Within that field, the Holy Grail is probably an Earth-like planet that contains all necessary aspects for life – water, being within the habitable zone, and having a healthy atmosphere and the right size. So far, such a planet hasn’t been found yet, but every new unique milestone puts us one step closer to that goal. And while not the Holy Grail, the new discovery is one of those precious milestones.

What exactly was discovered?

If one of these stars can have so many exoplanets, others can too

So let’s look at what exactly has been found. The research focuses on the star TRAPPIST-1, the monicker for the less appealing name 2MASS J23062928-0502285. The name TRAPPIST was chosen after the telescope with which the star was discovered, TRAPPIST being the acronym for TRAnsiting Planets and PlanetesImals Small Telescope, a small telescope used by the university of Liège. TRAPPIST-1 is an ultra-cool dwarf star on a distance of 39 lightyears from Earth. That in itself is pretty cool, because there are a lot of stars of that size. And if one of those can have that many exoplanets…

Around TRAPPIST-1, no less than seven exoplanets have been discovered. It’s not a complete surprise, because 3 of those were already discovered in May last year, but with 4 extra planets added this study is a record find. The exoplanets are extremely close to their star – if compared to our own solar system, all of the planets would be between the sun’s and Mercury’s orbit. The planet’s orbits range only range from only 1,5 to 20 days. Because the planets are so close to their mother-star, they’re tidally locked, meaning one side of the planet is in perpetual daylight and the other in perpetual night. 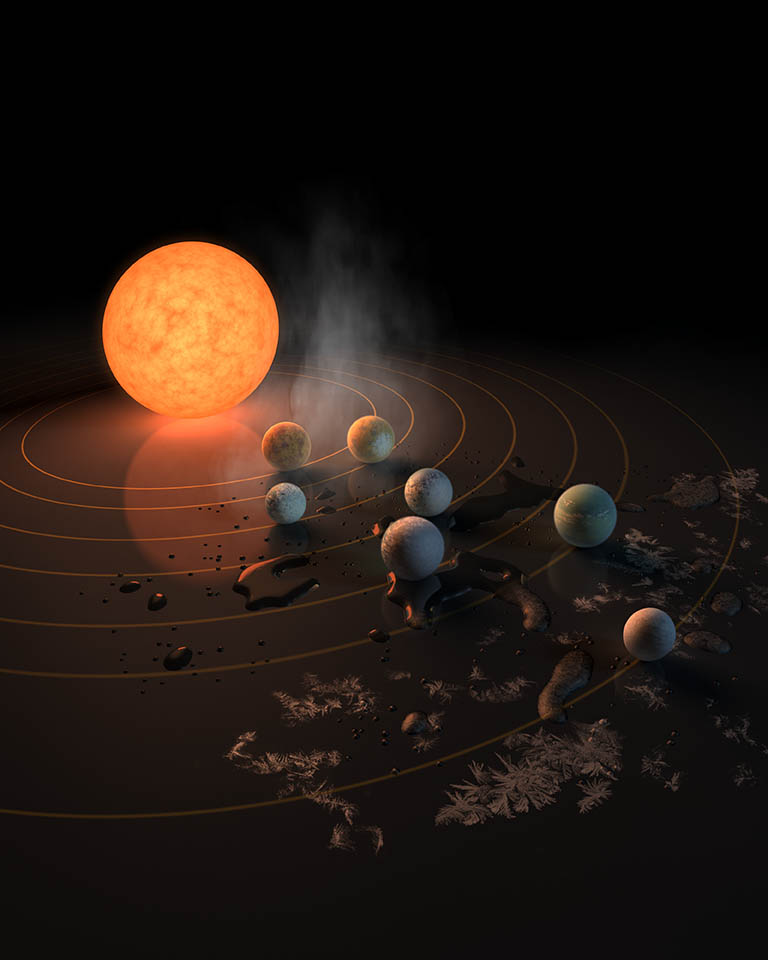 The planets are all most likely solid bodies rather than gaseous planets, the latter being a characteristic of bigger planets like Jupiter. That, including the distance to its star and a few other things, make the new discovery so exciting.

2. What makes this discovery so unique?

The TRAPPIST-planets in itself aren’t unique for an exoplanet discovery, but a combination of factors makes the find so groundbreaking. For one thing, it’s the first time that so many exoplanets have been discovered around a single star. Most exoplanets are pretty lonely. Of the 2,688 stars that we know have exoplanets , only 603 have a multiplanetary system. Of those, 280 have only 2 exoplanets. Our sun, with its 8 planets and a handful of dwarf planets, is the front runner into this race. No other star we know of has that many planets.

Astronomers have no only found new planets, but a new solar system

That’s why the discovery of no less than 7 exoplanets around a single star is a pretty big deal. Not only have astronomers found new planets like Earth, but they found a complete solar system similar to ours!

What’s perhaps most exciting about TRAPPIST-1 is its size. The star is small – it’s around 8% the size of our sun, which by cosmic standards is already a pretty tiny thing. It’s quite unique for such small stars to form planets, let alone 7 at once. Add to that the fact that the planet are quite large compared to their mother-star and you have a good mystery on how the formation of the system took place.

There’s a third aspect to the system that makes it exciting, and that is that 3 of the 7 planets are in the ‘habitable zone’ of the star. That means there could theoretically be water on the planets, a prerequisite for life – though that’s really the only possible clue we have of life. 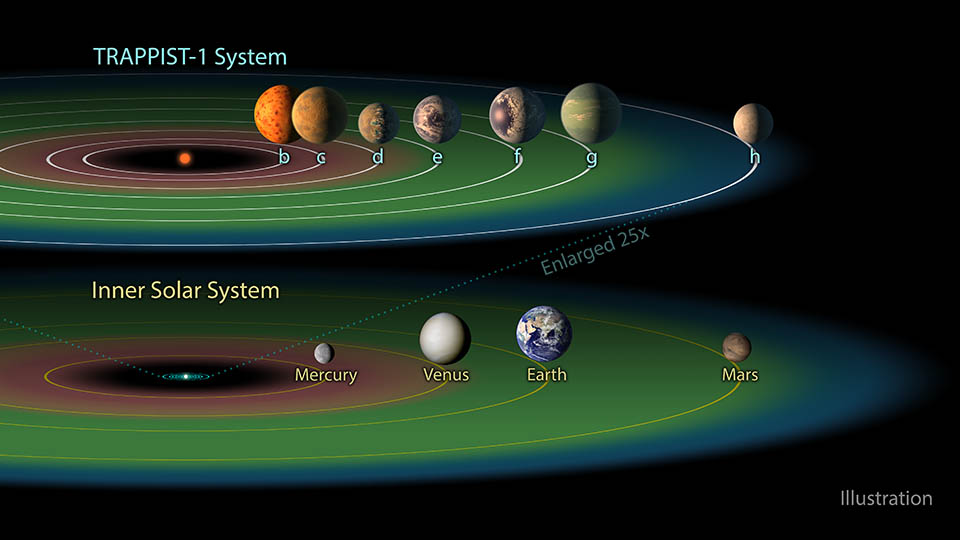 3. So… The million dollar question: do these planets have life on them?

At the moment, we have no reason to assume there is. We know pretty much nothing about the composition of the planet nor of its atmosphere. What we do know is that 3 of the discovered planets are in the stars habitable zone, which is one of the most important prerequisites for life. Other than that, future research will have to tell us more.

The scientists that made the discovery have looked at the planets before using the Hubble Telescope, and saw flat spectra, which might (or might not) be explained by the presence of clouds on the planet. But even that doesn’t say much, because clouds do not necessarily equal water.

We don’t know a lot about these planets, but astronomers are very interested in them

At this moment, there’s not much we know about the planets other than how large they are and where they orbit. Other astronomers will now start focusing on the star system to find out more details about the celestial bodies. Because TRAPPIST-1 is relatively close by, it will be easier for scientists to study things like the atmosphere of the planet to learn more about it.

In the coming years, astronomers will generally focus more on the details of exoplanets rather than discover new ones. It’s the main task of the James Webb Space Telescope that will be launched in 2018. The JWST will be able to look more closely at the chemical composition of exoplanet’s atmospheres and search for traces of ozone, oxygen and methane. Those can be telltale signs of life, though it’ll be difficult to find real, concrete evidence of ET.

At present, there’s no concrete research planned to study the exoplanets, but we can be pretty sure astronomers are very excited to learn more about this specific system.