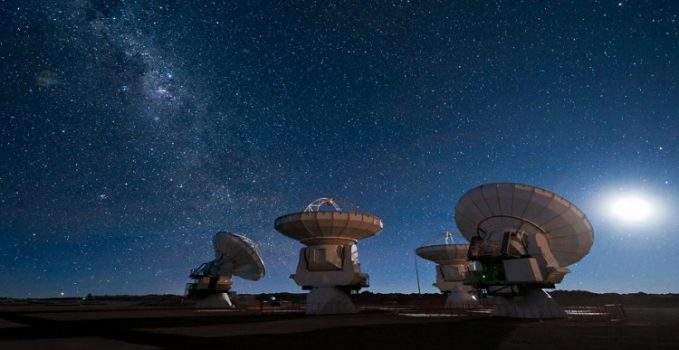 Posted On September 19, 2015 By In Achtergrond, Astronomie, Ruimtevaart And 3699 Views

The difficult question of Earth’s message to the universe

Our first encounter with intelligent aliens is an interesting subject for many science-fiction movies. Are we going to use music to communicate? Or would They have some magical Babel Fish? The truth is, the question of what our first message to the Visitors will be is quite controversial.

Humanity started to seriously think about sending messages into space in the early 70s, at about the same time when the SETI institute (‘Search for Extra Terrastrial Intelligence’) was founded. Massive telescopes searched the skies for that elusive beacon the ET’s might’ve send us, but so far no earth shattering distress signal has been detected.

Earlier on, humans had send out the Pioneer Probes to the farthest reaches of our solar system. The probes famously contain a few golden plaques, giving clues to whoever finds it about man, humanity, and its location in the universe. 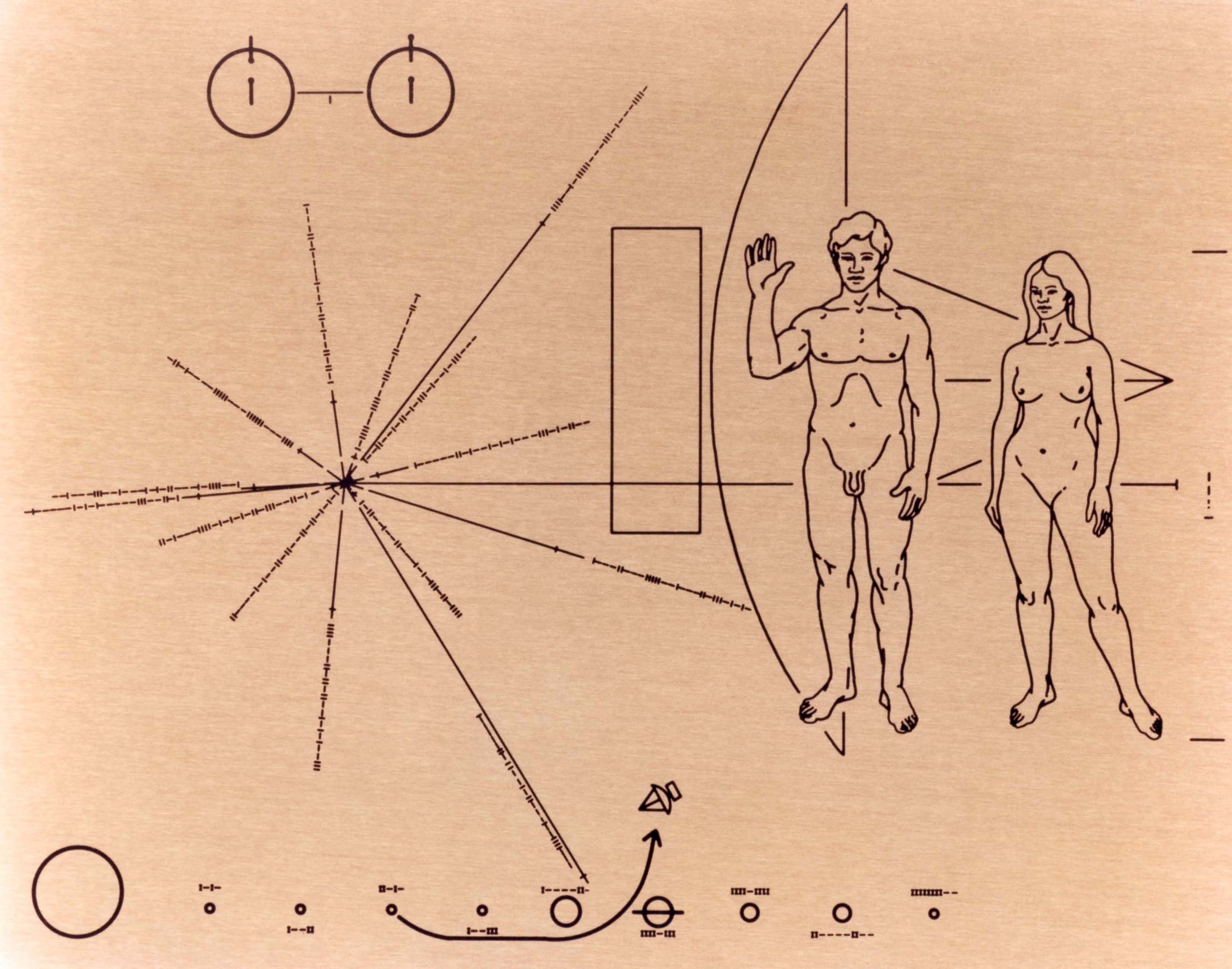 The so-called Pioneer Plaques contain a well thought out first message which would make it possible to identify just who sent the probes, should any non-human intercept them. Most prominently, it features two people, a man and a woman. Both are naked, and the man holds up his hand in a friendly greeting gesture.

Next to the couple, the measurements and proportions are depicted in binary code. This is not only to see how tall we are, but also to have ET determine things that influence our bodily builds such as gravity and our atmosphere. 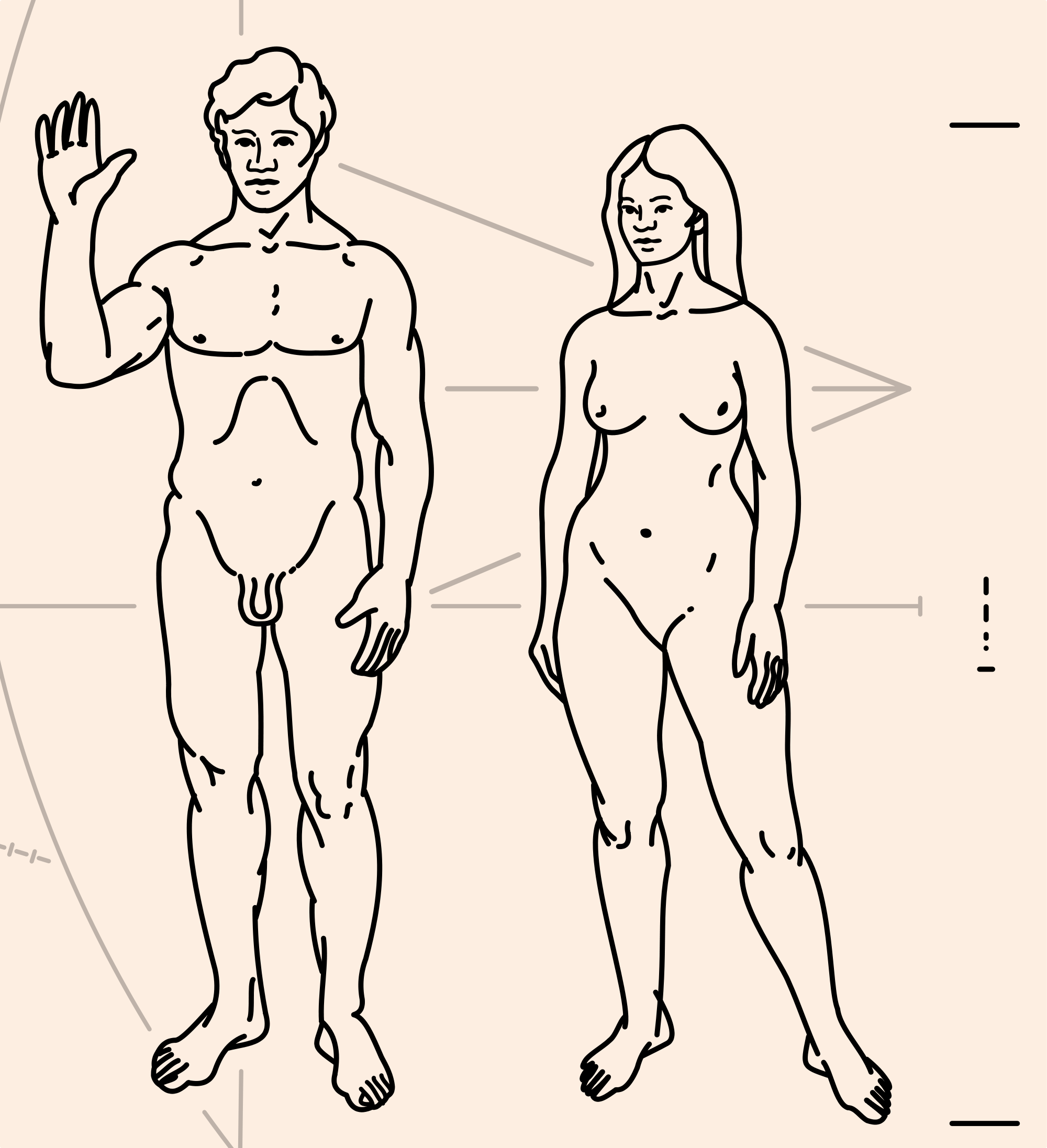 But the plaque contains a lot more subtle messages, such as the schematic representation of hydrogen, the most abundent building block of the universe, and also directions as to where Earth is: Third rock from the Sun, with lines depicting the relative distance from the Sun to the nearest 14 pulsars, coded in binary.

Trying to be unambiguous

The message was designed to be as unambiguous as possible: Any lifeform with consience intelligence should be able to decypher the message.

Therefore, the creators tried using the most universally recognisable symbols, such as mathematic binary code, chemical compounds such as hydrogen, and roadmaps like pulsars. It wasn’t without controversy however, as several institutions pointed out the arrow that indicates Pioneer’s trajectory by Jupiter was a symbol commonly associated with (human) hunter-gatherer tradition.

Overall though, the plaque served a pretty neutral message. It was, however, meant as a symbolic gesture. Even the most optimistic believers of UFO’s didn’t really believe intelligent life lived in our own Solar System, much less we’d reach them. And the fact that the Pioneer Probes wouldn’t encounter even the closest star system for at least 40,000 years, made it that the plaques pretty much just a symbol.

Around this time, man started to wonder about its place among the stars

All this happened during a time when mankind for the very first time in history started to seriously explore its place among the stars, and with it, how to reach out. And as with all discoveries of new technologies, the ethics about it were very unclear at first.

At that time, groups of astronomers started to search the skies, trying to detect communications from Extra Terrestrial Civilizations, or ETC’s. Of course, it wouldn’t take long before those same astronomers figured that receiving was one part of it, but should we not also send messages out, to tell whoever might be listening where (and who) we were?

A discussion then emerged about who would actually send the first message. There is, even to this day, little consensus about the answer to that question.

For starters, nothing prevents anyone to send a message out declaring war on whoever receives it – save for common sense and no real motivation for anyone to do so. It’s easy to send just about any random message to the stars, whether it’s a well thought out message like Pioneer, or a simple “Hello world” in Morse code.

That may seem strange as Morse code is a distinctly human concept, but it’s far from fiction to send out nonsensical (at least to ET) messages. Over the course of 15 years, things like commercials for crisps and Hollywood movies were sent out into space.

There is protocol about replying to aliens, but not about sending out messages

During the early days of broadly available SETI-research, the SETI-group decided to set up some guidelines about the course of action should anyone encounter an alien message – however, these guidelines (called the ‘SETI Protocol’) made no mention of our first message towards the stars. Even now, there are no rules about what our “Hello Universe” will be.

That led to a fierce debate in 1999, when a group of astronomers sent out a message to 4 nearby stars, without prior notification to the SETI Group (or anyone else for that matter).

The message was called the ‘Cosmic Call’, and was part of a mission led by Alexander Ziatsev. ‘Cosmic Call’, like the Pioneer Plaque, was an attempt to communicate with alien life force using universally recognizable code. This code was a lot more complicated than the Pioneer Plaques, and attempted to translate a simple ‘Hello’ into symbols which had to first be explained in a sort of syllabus. The end of the message invited the receivers to send a reply.

“It would open the floodgate to many nonsensical messages”

‘Cosmic Call’ made for heavy debate within the SETI-community, and gave birth to the term METI (‘Messaging to Extra Terrestrial Intelligence’, also known as ‘active SETI’). Ziatsev and his team were heavily criticized for sending messages of their own accord, most notably by astronomer and science fiction author David Brin, a prominent SETI-scientist. Sending active messages would open the floodgates to more messaging, presumably resulting in an anarchy of radio waves with messages to the universe.

Whether it be good or bad is up for debate, but Brin’s fear were not unjustified. In the early 2000’s, METI became quite conventional and the subject of many commercial initiatives. In 2008, a team of NASA astronomers attempted to raise some public awareness to the importance of SETI, and set up a sort of contest for people and corporations to send their own message to space.

Among those message were, for instance, a copy of the movie The Day After Tomorrow, and a commercial for Doritos. This was obviously criticized heavily by original SETI astronomers, who thought these were not the sorts of messages we should be sending out.

To this day, METI is fiercely debated and has little consensus

To this day, there’s been no consensus about Messaging Extra Terrestrial Intelligence. There’s still a fierce debate in the community, not only about the contents of the message but also about where to send a message to.

Overall, man has sent a great many messages into the deep universe. Some are intentional, many (like our own radio broadcasts) simply trickle into space of their own accord and will most likely not be discovered anytime soon. The question is: If anyone is out there, will they be able to find that tiny radio wave that was broadcast only a few years ago?