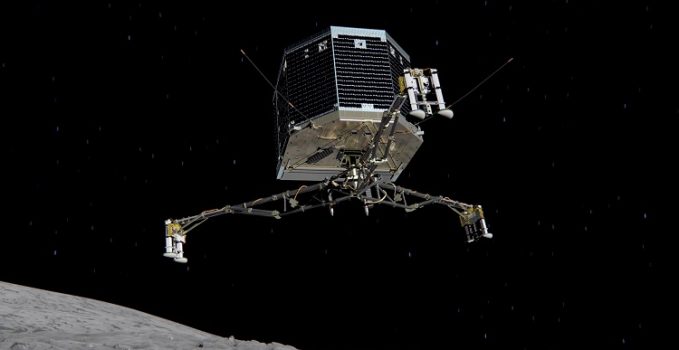 Exactly one year ago, ESA did something that had never been done before: It landed a small probe on a comet. The landing didn’t go exactly as planned, but hey, who cares? Philae taught us many things about comets, and about 67P/Churyumov/Geramisenko in general. What have we learned in those 12 months since that nail biting moment?

1. Landing on a comet is way harder than it looks

Ok, maybe landing on a comet does look very hard, but Philae’s landing was far from ideal. The lander barely even made it to the surface of 67P at all.

Philae was supposed to fire off a series of harpoons to attach itself to the surface, which was the only way to make sure the lander would be stable. With the weight and mass of 67P, Philae had about the same gravitational mass as a piece of paper, which would be easy to send off course.

The lander bounced off the surface, twice, and ended up upside down. This confused scientists somewhat, because they didn’t expect the lander to move while collecting data.

Almost 4/5th of the comet is empty

It’s light. So, so light. The one thing Philae immediately found was that comet 67P is full of holes and has almost no core. That makes the comet quite light, with almost 75% of it’s interior being empty space.

Scientists were able to detect this using 3D models of the comet from the infrared data Philae obtained. The reason is most likely all the different pits on the surface, but astronomers are still wondering about how those came to be. One explanation is that gas had built up inside the comet, causing exploding holes, but a more interesting hypothesis is that water and ice evaporate as the comet flies closer to the Sun. This, ultimately, is that goal for Philae: To study how the comet changes shape and structure as it zips across the solar system.

3. The comet has many organic compounds – but none like Earth

Pretty soon after landing, Philae found evidence of organic matter on the surface, especially in regions that caught a lot of sunlight. In the most recent studies of data, even more organics were discovered: 16 organic compounds were found, including 4 that were never before found on a comet.

But, more importantly, the organics on the comet hold almost no resemblance to those on Earth. That contradicts the standing hypothesis that water on Earth came from extracelestial bodies like comets. So, back to the drawing board on that one…

4. There’s water, but way less than we though.

There’s very little water or even ice present on the comet, and this is slightly odd according to astronomers. A comet like 67P should have much water, but it’s unclear where most of it’s gone.

What the astronomers can say though is that 67P has a water cycle, one that synchronizes with the comet’s day/night cycle. Comet’s, like other celestial bodies, have a cycle of day and night – in 67P’s case, that cycle is 12 hours instead of Earth’s 24.

During that cycle, the puddles of water on the comet’s surface briefly into ice, only to defrost when daylight comes. Aside from that, the amount of water varies as the comet flies closer to the Sun.

There’s still a lot more to discover on the comet. Philae went in hibernation shortly after landing, and though it woke up very briefly in June it doesn’t really collect much data anymore. But that’s alright – the little brave lander collected a LOT of information that is still being sent to Earth, and there’s loads of data already here to be analyzed by ESA-astronomers. So don’t worry, the last word about Philae has not yet been written!